As Texas Gov. Greg Abbott phases in reopening, some in his party are testing his rules 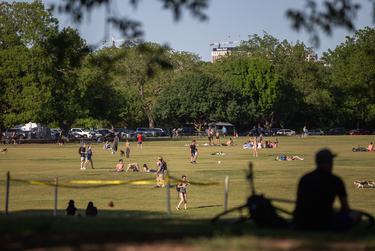 Gov. Greg Abbott promised that reopening the Texas economy would be a slow, deliberate process.

Not everyone got the memo — or wants to go along with it.

As he guides Texas through arguably its most sensitive phase of the coronavirus pandemic yet, Abbott is facing a variety of tests to his pacing, mainly from a limited but increasingly vocal group of fellow Republicans who want a swifter reopening. It comprises some usual suspects — activists who have been complaining about his coronavirus response for weeks — but also some newer agitators, including a smattering of local elected officials, business owners and state lawmakers who have given Abbott leeway until now.

Abbott’s instinct so far has been mostly to deescalate, staving off confrontations that could hobble the careful course he is charting. On the line are countless lives — and the potential for a resurgence of the virus for which Abbott would shoulder most of the blame.

But with the anticipated second phase of business reopenings still over two weeks away, the political obstacle course will undoubtedly continue for Abbott, if not intensify. He announced Monday that all restaurants, retail outlets, movie theaters and malls can reopen Friday at 25% capacity. He has already sought to assuage calls for quicker action by teasing that he could reopen places like barbershops, hair salons and gyms before the May 18 target date that he initially set for phase 2.

Lt. Gov. Dan Patrick, who has been more aggressive than Abbott in pushing for an economic restart, sought to address the agitation during a tele-town hall Tuesday with conservative activists. He said the state’s reopening process is being partly “driven by what doctors tell us, and they don’t run the show, but we do listen to their advice, and … they’re gonna be a little bit more cautious than you as an entrepreneur [or] myself might be.”

“And so I think we’ve struck the right balance,” Patrick said during the call hosted by Texas Values. At the same time, Patrick said he “sure would’ve liked to see barbershops and salons open up … and I think that’s gonna come pretty soon, maybe before the next step, which is May 18.”

Abbott’s political standing remains solid as he navigates the calls from within his own party to speed up the reopening process, according to a recent University of Texas/Texas Tribune Poll. The survey, conducted April 10-19, found that 56% of Texas voters approve of his coronavirus response, while 29% disapprove. Among Republicans, 86% gave him good marks, and he registered similar levels of approval among those identifying themselves as the furthest to the right.

But beyond the normal political pressures emanating from Austin, Abbott is also having to deal with local officials pushing the envelope. Last week, the mayor of Colleyville temporarily allowed restaurants with patio seating and hair salons to open, seemingly at odds with the governor’s order. Colleyville Mayor Richard Newton said he communicated with a deputy attorney general and general counsel for the state and was told he didn’t have to change his order, which will be amended again Friday to align with Abbott’s latest directive.

Hood County Attorney Matt Mills said Wednesday he would not prosecute a business for defying Abbott’s orders, calling them “unjust and unconstitutional.” The city of Dallas is suing a hair salon owner after she defiantly opened her business — a direct violation of her city and county’s ordinance. In Tarrant County, a “Honkeytonk Crawl for Freedom” is planned in the Fort Worth Stockyards on Friday.

“These folks are just looking for attention, and they’ll do anything to get it and get their 15 seconds in the light,” Tarrant County Judge Glen Whitley said. “Then they’ll be gone and they’ll be forgotten.”

The Honkeytonk Crawl for Freedom is being organized by Chris Putnam, who waged an unsuccessful primary challenge to U.S. Rep. Kay Granger, R-Fort Worth, in March. He said the event “will only take place if those businesses do, in fact, choose to open so we’re monitoring that closely this week.”

“I generally support the Governor and always have, but all of the local and state politicians rushed into government-imposed lockdowns and business closures prematurely and made some terrible decisions based on flawed forecast data that we’ll be living with the consequences of for a long time,” Putnam wrote in an email.

The instances of defiance may not be widespread — or even indicative of broad public sentiment, even within Abbott’s own party — but they have gotten his attention. Hours after Abbott’s news conference Monday, the Dallas hair salon owner, Shelley Luther, told Facebook friends that Abbott “just reached out to me to help get salons open sooner.” She also said she would be meeting with James Huffines, who chairs the governor’s task force to restart the economy.

When it came to Colleyville and Montgomery County, Abbott opted for conciliation. He said much of the Colleyville mayor’s proclamation was actually in sync with his statewide order, and he would be glad to talk with the mayor about where it was not. On Tuesday evening, hours after Keough announced his plan to defy Abbott, the governor went out of his way to sympathize with the county judge as he called him a friend and “good guy” trying to do the right thing.

“I actually went back and looked at the order, and I can understand why he’s saying that it needs clarification, and so we will provide that clarification,” Abbott told KPRC, a Houston TV station. “I can now see why the judge views the language as being ambiguous, and we will clear up that ambiguity.”

In the Texas House, the hard-right Freedom Caucus is pushing for barbershops, hair salons and gyms to reopen immediately. Several other House Republicans — including those who do not normally cross Abbott — have taken up the cause, too. Rep. Jeff Leach, R-Plano, sent Abbott a letter Wednesday asking him to let barbers, salon owners and personal trainers return to work Friday.

“Respectfully, ENOUGH!!! You are the only one that can STOP this!!! ENOUGH!!!” state Rep. James White, R-Hillister, said in a series of tweets to Abbott on Wednesday that referenced Luther’s situation.

Dealing with the locals

Throughout the pandemic, Abbott has had a complicated relationship with local officials, who are largely Democrats in most of the state’s major metropolitan centers and mostly Republicans elsewhere. In the early stages of the pandemic, Abbott put the onus on local officials as he held off for several days before issuing a statewide stay-at-home order. Now, his latest order largely overrules them.

The state’s urban leaders gave mostly measured reactions to Abbott’s news conference Monday. Houston Mayor Sylvester Turner acknowledged Abbott’s latest order takes power “out of our hands locally” but expressed hope the order would be successful. Bexar County Judge Nelson Wolff said he agreed with reopening restaurants and movie theaters at 25% capacity but wished Abbott would have mandated masks. And Dallas County Judge Clay Jenkins, who has been Abbott’s clearest foil among big-city officials, said he asked the county’s top public health experts to “carefully review the Governor’s orders and will wait to hear from them.”

For at least a month, Abbott has held weekly conference calls with county judges and mayors to keep them in the loop. Abbott’s office points to a particularly good relationship with Dallas Mayor Eric Johnson, a former Democratic member of the Texas House, whose city was the first major hot spot for the virus in Texas.

“I talk to Gov. Abbott a lot, we talk to each other several times a week, sometimes more than one time in a day. We have a great line of communication, a great working relationship, and look, he was going to have to open this economy at some point” and face critics on both sides, Johnson told Dallas radio host Mark Davis on Wednesday. “The reality is under state law, he gets to make that decision, and guess what? He’s made the decision … so my response to that decision is we must make it a successful” one.

Abbott has had a frostier relationship with Jenkins, who was the first big-city leader to issue a stay-at-home order and pushed for more aggressive action statewide. In early April, Abbott’s office instigated a back-and-forth with Jenkins over the fate of a pop-up hospital at Dallas’ Kay Bailey Hutchison Convention Center, implying Jenkins did not want to use it. Johnson quickly echoed Abbott’s concern. Jenkins denied the notion that he did not want the facility and suggested Abbott should pick up the phone next time before going public with such an insinuation. After the spat, Jenkins said he called Abbott’s chief of staff, Luis Saenz, who wrote the letter, and had a “good conversation.”

In Harris County, Abbott was noticeably absent from the chorus of Republicans who teed off on that county’s judge, Lina Hidalgo, last week for requiring residents to wear face coverings in public or face a fine of up to $1,000. That chorus included Patrick, who called Hidalgo’s order the “ultimate government overreach” and derided her on the Texas Values call as the “29-year-old AOC acolyte in Harris County,” referring to U.S. Rep. Alexandria Ocasio-Cortez, D-N.Y.

Of course, Abbott ended up gutting such local mask orders with his latest statewide order, preventing local governments from imposing fines or penalties on those who do not wear face coverings. Afterward, Hidalgo said the county had made its point with the threat of the fine and would amend the order to satisfy the governor.

As tensions simmer locally, Abbott also has had to consider an unpredictable White House. President Donald Trump publicly lambasted Georgia Gov. Brian Kemp last week for moving too quickly in allowing businesses to operate — blowback that Abbott was mindful of as he spent the latter part of last week preparing his new order.

Notably, Kemp included barbershops and gyms in his reopenings, while Abbott did not — and made sure to say so at his Monday news conference. Whatever the differences with Georgia, Trump’s review came in the next morning, delivering Abbott some welcome political cover.