Coronavirus in Texas: Baylor says it will resume in-person teaching this fall and open its dorms 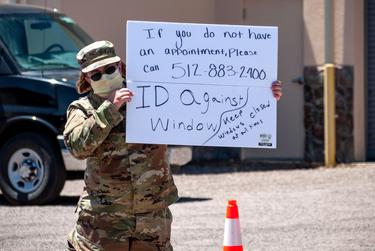 [7:15 p.m.] As schools across the state remain closed for the foreseeable future, Baylor University President Linda Livingstone announced Monday that the university intends to resume in-person teaching and allow students to return to the dorms this fall.

Livingstone said moving forward with the plan “depends greatly” on the progression of the new coronavirus in Waco and the surrounding area, “and the continued information we receive daily from government and public health officials.”

In a written statement, Livingstone noted that the university is “not planning for a ‘normal start’ of the fall semester, given the lack of a treatment protocol or vaccine for COVID-19.” The school is also preparing to adapt its instructional and residential life models and on-campus activities, as needed, to protect the campus community, she said.

Baylor’s news came hours after Gov. Greg Abbott announced that the state’s stay-at-home order will expire at the end of the month and that Texas restaurants and retail stores will be allowed to reopen on Friday at 25% capacity. — Alex Samuels

In addition to supplying staff with personal protective equipment, American announced it will also “start the process of distributing sanitizing wipes or gels and masks to customers. The latest changes build on American’s commitment to customer and team member safety.” — Alex Samuels

[4:50 p.m.] A federal judge has denied an emergency request by the American Civil Liberties Union to release some Dallas County jail inmates during the pandemic.

U.S. District Judge Ada Brown said in her Monday ruling that an explanation for her denial would come later. Earlier this month, Dallas County inmates, represented by the ACLU and other civil rights attorneys, sued for the release of jail inmates over 50 or with medical conditions.

As of Sunday, 141 inmates at the Dallas County jail had tested positive for the new coronavirus, according to the Texas Commission on Jail Standards. — Jolie McCullough

[1:10 p.m.] Texas reported 666 more cases of the new coronavirus Monday, an increase of about 3% over the previous day, bringing the total number of known cases to 25,297. The state typically reports fewer new cases on Mondays. Cottle County reported its first case Monday; over three quarters of the state’s 254 counties have reported at least one case.

Harris County has reported the most cases, 5,729, followed by Dallas County, which has reported 3,014 cases. See maps of the latest case numbers for each county and case rates per 1,000 residents.

As of Monday, 1,563 patients are known to be hospitalized in Texas. That’s an increase of 21 patients from Sunday. At least 290,517 tests have been conducted. — Anna Novak

“The Texas Municipal Police Association, and our members of the local law enforcement associations listed below, in conjunction with the Houston Police Officers’ Union and the Harris County Deputies’ Organization, implore you not to instruct, direct or even permit your law enforcement officers to enforce County Judge Hidalgo’s executive order regarding citizens wearing masks during this pandemic,” wrote Kevin Lawrence, executive director of the Texas Municipal Police Association, in a statement.

Hidalgo has defended the order as another “tool in the toolbox” for stopping the spread of the coronavirus.

“This is not a police state,” she said at a press conference last week after announcing the new rules. “But we needed to make clear it’s not a recommendation, it’s something we have to do for sake of our safety, our lives and our economy.”

The measure, which carries a fine of $1,000 for violators, drew harsh criticism from GOP officials. The law enforcement associations said that masks can help fight the spread of the new coronavirus, but described the requirement as “tremendously bad public policy.”

“Such a mandate will only serve to erode the relationship between our law enforcement officers and the citizens they serve in a time when law and order and public safety has never been more important,” Lawrence said. — Sami Sparber

Poison control centers nationally received over 45,500 calls in the first three months of this year, a 20% increase in calls as compared with 2019, according to a report released Friday by the Centers for Disease Control and Prevention.

The uptick comes as public health officials and CDC guidelines advise people to clean frequently touched surfaces often to contain the spread of the new coronavirus, which can live up to five days on metal.

Ingestion and inhalation were the exposures Texans most frequently reported.

“Disinfectants and other cleaning products should NOT be inhaled, ingested, injected or used in any manner outside its labeled instructions,” Cristina Holloway, public health education manager for the North Texas Poison Center, said in an email to The Dallas Morning News. “There are currently no vaccines, drugs or products approved to treat or prevent COVID-19.”

About 70% of calls about hand sanitizers involved children age 5 or younger. The Texas Poison Center Network recommends keeping household products locked away and using child-resistant locks on cabinets. It also recommends not mixing products, which can cause deadly gases or fires. — Clare Proctor

[5 a.m.] By a wide margin, Texas voters approve of the widespread business closures and statewide stay-at-home order even though the economy is taking a catastrophic hit, according to the latest University of Texas/Texas Tribune Poll. Those findings come as Gov. Greg Abbott says he will soon announce plans to reopen a wide range of Texas businesses.

Lt. Gov. Dan Patrick has suggested that saving the economy is more important than responding to the coronavirus. But after first making that suggestion last month, Patrick has experienced an uptick in disapproval among two groups: registered voters over 65 and independents. — Ross Ramsey

Disclosure: The University of Texas has been a financial supporter of The Texas Tribune, a nonprofit, nonpartisan news organization that is funded in part by donations from members, foundations and corporate sponsors. Financial supporters play no role in the Tribune’s journalism. Find a complete list of them here.